The purpose of this report is to address the matters surrounding the UK markets over the next three years and thus whether it is ideal to invest in the UK. By scanning and analyzing the environment through PESTEL and Porter's 5 Forces, it was assessed that investing into the UK market would not be a beneficial or meritable course of action for AgavEnergy. The analysis of the UK environment over the next three years, showed various unstable forces that would impact the market.

The UK markets are expected to see fluctuating growth and disturbances. This is seen in various forces affecting the environment over the next three years. Growing concerns over sugar consumptions, restrictions on sales and marketing, and Brexit effects are some of the factors that have contributed to our recommendation. This report will analyse and discuss the decision as to why it is not recommended to invest into the UK, through analysing the PESTLE and Porters forces. Technological forces (in PESTLE) exist in the environment, however, these forces constitute for a small influence and will therefore not be discussed in this report.

Britain is expected to leave the European Union[2] (EU) on 29 March 2019 (Brexit). No longer being part of the EU means that various legislations in Britain, and ultimately the UK, will see changes. After leaving the EU, the UK is expected to see a tightening of regulations on foreign producers. Economies that remain in the EU will have the benefit and knowledge of new ideas and advances of other nations, without undertaking costly investments themselves. If regulations tighten, UK firms must invest on their own (Dhingra, S. et al 2016). Thus, the process will become more complex for our company to invest as a foreign investor and it will be harder to get into the market (having to compete with local companies in this small industry). Currently the UK has trade agreements with EU countries. After Brexit, the UK would potentially lose trade agreements with its neighbours (Full Fact Team 2018) and reduce its negotiating power (Dhingra, S. et al 2016). Thus, minimising efficiency to trade, import, and export products to EU countries. This shows us the risks we face, such as importing ingredients to make our drink, any packaging, or shipping of drinks to be sold in EU countries, if we invest in the UK.

Laws in the United Kingdom are changing in attempt prevent children from consuming energy drinks. This shows the increase in restrictions in sales and marketing. Energy drinks cannot be sold to children under the age of 16 and this will soon be increased to the age of 18. On the 6th April 2018 the UK Home Office introduced a tax of 18 or 24 pence per litre depending on the level of sugar as part of an anti-obesity campaign (HM Treasury 2018). It has further been put in place to limit or decrease sugar content of soft drinks and energy drinks in the UK. Along with this has come the ‘Traffic Light System,’ which is colour coded nutritional information regarding food content (Food Standards Agency 2018). The system uses red (high), amber (medium) and green (low) to represent the fat and sugar contents. These two factors combined would make the production and marketing of our sugar-based energy drink more complicated. In addition, post Brexit, protectionism laws are in place to protect and support the local energy drink industry. If our company ran into difficulties, we would not be a priority to be protected. Changes in employment laws, as a result of Brexit, will cause a shortage of jobs and lower employment rates across the UK. With a difficulty in hiring employees company growth hinders, causing economic difficulties in keeping our company running understaffed while maintaining production levels. 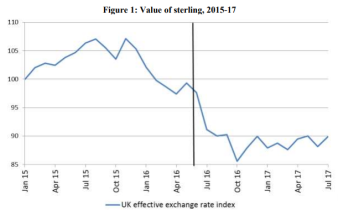 Since the referendum to leave the EU, there has been adverse effects on the economy. “The pound depreciated by approximately 10% immediately after the referendum,” (Breinlich, H. et al, 2017) which is illustrated in Figure 1 where the value of sterling is shown decreasing after the referendum. Evidence suggests that the GDP is expected to decrease by 1.3% due to consumer spending and business investment (Inman, P. 2018). The Bank of England forecasts a decrease in consumer spending from 1.9% in 2017 to 1.2% in 2018, and a drop in business investment from 3.4% in 2017 to 0.8% in 2018 (Inman, P. 2018). This supports the evaluation of uncertainty in economic practices, and an unstable, weakening sterling. The effects of Brexit have had a negative shock on the economy since the referendum. Therefore, the recommendation is not to invest because of these factors. 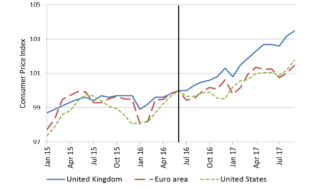 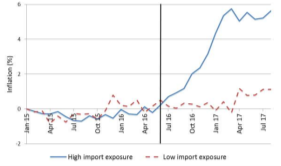 The Centre for Economic Performance (CEP) found that by June 2017, the effects of inflation cost the average family £7.74 per week (Breinlich, H. et al, 2017). Inflation has been growing since that estimate. Inflation growth is illustrated in Figure 2 alongside. Import costs have increased as a result of inflation. With an increase in inflation rates and import costs, the manufacturing and production process of the AgavEnergy drink will become costlier in the UK.  The knock-on effect will cause prices to rise (evident in the graph of figure 3, which shows prices rising after the referendum). Consumers will have less disposable income to spend on products. Subsequently causing money flow issues in the industry. From this, we can assume that buying will be directly affected. Using this theory on credit-based buying, we can assume that banking institutions will likely decrease their interest rates on loans and credit, which will increase the likelihood of consumers taking out loans.

Following the Brexit referendum, foreign investment has fallen by almost 20% and is expected to decrease (Taylor, C. 2018 and Dhingra, S. et al 2016). Foreign investment falls under the services sector and makes up almost three quarters of the UK economy. A decrease in this sector greatly hinders the growth of the economy and markets. This is the biggest drop in foreign investment that the UK has seen, and Germany has now overtaken the UK in having the most foreign investment (Taylor, C. 2018). These factors show the uncertainty foreign companies have about UK markets and economy. Therefore, supporting the decision to not invest.

The imposed sugar tax laws have heightened consumer awareness on their sugar consumption. With an energy drink containing natural sugar from the agave plant, AgavEnergy will be more appealing to consumers. With our energy drink on the market in the UK, it will allow for a choice for the consumer. However, the government plans to impose a ban in sales of energy drinks to children as it contains high amounts of sugar, fat and caffeine, and it is cheaper than soft drinks making it more likely to be purchased. When the government implements this ban, marketing our energy drink will become challenging and restrictions on sales and marketing will increase. Although there is an increase in health awareness in society and AgavEnergy would be satisfying new desires for the health conscious, brand loyalty to existing energy drink brands and restrictions on sales and marketing would make selling our energy drink in this environment more challenging.

There is an increasing awareness on people’s impact on the environment. People are becoming more conscious of their decisions. For example, purchasing recyclable products, products not containing palm oil, opting for biodegradable options, etc. AgavEnergy uses the agave plant as its main ingredient, which is a sustainable resource and therefore does not impact the environment negatively. Thus, AgavEnergy would be satisfying this environmental factor.

The entrance of AgavEnergy into the UK market allows a variety of choice for consumers. AgavEnergy energy drinks contain natural sugars and are therefore a healthier alternative to existing energy drink brands. This gives our company a competitive advantage to use in marketing.

However, with limited energy drink brands in the industry, competitive rivalry is high trying to gain the most market share and brand loyalty. The main competitors in the market would be energy drink companies such as Red Bull, Lucozade (Suntory Holdings), Monster Energy, Powerade and other smaller brands. Lucozade currently owns (and leads) the market share within the energy drink industry (Mintel 2018). The top brands in the market have relatively close shares (vice versa with smaller brands), which enforces that entrance into this market would be difficult. Competitors will work to drive out any competition to maintain their shares.

AgavEnergy can come into the market as a threat of substitutes. This being because its natural sugar source is a healthier alternative to other energy drinks. However, other energy drink companies have a ‘light’ or ‘no sugar’ option. With brand loyalty existing, consumers may opt for their alternative. Many consumers are likely to opt for established brands due to their existing reputations. These factors would make it more challenging to market our energy drink as a better alternative, as we would have to build a reputation from scratch and consumers may not be willing to deviate.

Overall, after assessing the above factors, it can be concluded the political and legislative changes in the UK will bring restrictions on marketing and sales, and potential difficulty in trade, imports, exports, and further changes that Brexit will bring. In addition, the economy has experienced a negative shock from the Brexit referendum, which has resulted in the weakened value of sterling, higher imports and cost of living, and an overall unstable (or uncertain) economical presence. Although social and environmental factors support AgavEnergy’s natural sugar (health conscious, agave plant being a sustainable resource) and favour AgavEnergy, there exists competitive rivalry and brand loyalty in the UK, making it more difficult for a new entrant to come into the market and succeed immediately.

After the evaluation of the factors analysed in the discussion, it is recommended that AgavEnergy does not invest into the UK during this period. This is not an investment that should be done imminently due to the state of the UK over the next three years. Recommendation is to refrain from investing in the UK.

Full Fact Team (2018), Everything you might want to know about the UK’s trade with the EU, Available At: https://fullfact.org/europe/uk-eu-trade/

Taylor, C. (2018), Brexit could cause ‘serious damage’ for foreign investment into the UK, new study says, Available at: https://www.cnbc.com/2018/11/01/brexit-could-cause-serious-damage-for-foreign-investment-into-the-uk-new-study-says.html