Milton Friedman was an American macroeconomist who was awarded the 1976 Nobel Prize in economics for “his achievements in the fields of consumption analysis, monetary history and theory and for his demonstration of the complexity of stabilization policy.”1 He was in favor of using the apparatus provided by the Keynesian theory but was in disagreement with its conclusions and solutions. He advocated for a minimum role of the government in fiscal and monetary policy and supported the economic concept of a free market economy. He also theorized the concept of natural rate of unemployment in the economy, stagflation and put forward the policy of slow and steady expansion of money supply in the economy, also called “monetarism”.

In his 1970 article titled “The Social Responsibility of Business Is to Increase Its Profits,” he had argued that a firm should only be concerned with maximizing the value for shareholders and not engage in any socially responsible/charitable behavior unless there is an inherent monetary benefit to the firm.  He was of the opinion that any such behavior of a firm, acting for social good, is a “fundamentally subversive doctrine” and it can be viewed as being equivalent to a firm taxing its shareholders in their income (in the form of dividends from the firm) and also at the same time deciding where to spend these taxes. This role he says is that of the democratically elected or appointed political system and should be left to the executive branch, legislative branch and the judicial branch.

Friedman on responsibilities of firms

In his article he does not ask the firms to hold back on community service or social good when it furthers the monetary interests of the firm and its shareholders. As an example, he argues that if the firm decides to invest in better infrastructure and facilities for the community that it is based in, it will in the long run attract employees with better skills and thus this kind of social good is justified. However, in general, the social good or allocation of scarce resources should not be done by a market mechanism (one that requires all the parties to agree unanimously) but rather by a political mechanism (one that requires a majority of the parties to agree) since in most cases it would be impossible to achieve unanimity. Thus, as per Friedman the market mechanism or firm engaging in social good is a “fundamentally subversive doctrine” or that business needs no ethics but only requires to follow the laws and regulations of the land and to maximize its profits.

Friedman’s doctrine has gathered a lot of support in the past years wherein theorists claim that it supports optimal allocation of scarce resources for the entire society. It in effect solicits Adam Smith’s invisible hand, where every person engaged in the business of the firm acts in self-interest and this leads to the highest collective utility of the group. However, there is ample evidence of creation and improvements of many laws and regulations in the past to consider and safeguard the interests if the community and employees of firm. Evidently, these results couldn’t be achieved by the optimal allocation of resources by the firm, executives and shareholders on their own. In the USA, these include but are not limited to The Equal Pay Act of 1963, The Clean Water Act of 1977, and the Clean Air Act of 1990.

In his paper, Friedman says that the primary responsibility of the executives is to maximize the profit/value of the firm for its shareholders and this has led to two important trends in the corporate world: -

In their paper Zhang and Gimeno2 talk about the earnings pressure faced by the CEOs in short term and how it leads to sub-optimal outcomes for the firm profits and its value in the long run. They argue that in order to maximize short term profits executives are often led to compromise on building a competitive position for the firm in the market for the long haul. At the same time, since the pay perks of these executives are also tied to performance this leads to a behavior of executives that leans in the above direction even more. This trend is worrying not only because it has led to the CEO-to-worker compensation ratio to climb from 20x-30x in the 1960s-70s to 351x-295x in 2000s-2010s but even more so because this rise in CEO compensations has been shown to be in tandem with stock market losses and gains. In their article3 Davis and Mishel confirm this trend with their findings for S&P 500 firms. They go on to conclude from this trend that escalating CEO compensations more often than not don’t arise from an increase in their individual contribution to the firm or an increase in firm’s competitiveness as compared to before but simply from improved market conditions. They further show that CEO compensation increased more rapidly than the compensation for other highly paid workers thus indicating that it isn’t skill/talent and individual contribution that is being rewarded. Furthermore, this short-termism among company CEOs has led to a shorter lifespan of the firms. Scott, Viguerie, and Waldeck show in their paper4, the average lifespan of a S&P 500 firm had dropped to 15 years in 2017 as compared to 33years in 1965. They also predict that about 3 quarters of S&P 500 firms will be replaced by new firms or acquired by other firms in next 10 years.  He blames lack of innovation i.e. “creative destruction” and lack of firms to keep up with changing consumer landscape as the primary reason behind this trend. 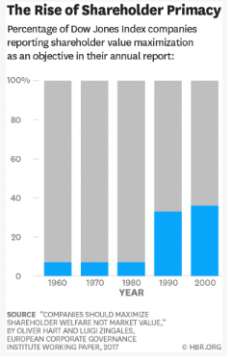 Thus, there is enough evidence to show that Friedman’s theory can lead to suboptimal outcomes in the market mechanism and this gives room to serious consideration of shareholder activism. In their paper5 on Shareholder Activism on Sustainability Issues, Grewal, Serafeim and Yoon find that addressing shareholder concerns about social good on “material issues” can in fact be associated with resulting increases in the market valuation of the firm even in the long term.  They classify shareholder concerns into material and immaterial topic as relevant to the industry the firm operates in, for example managing the impact in environment would be a material issue to work on for an energy or an automobile firm. In fact, Hart and Zingales in their paper6 argue that it is the fiduciary duty of the firm’s executives to comply with the shareholders concerns and to maximize shareholder welfare instead of just focusing on the shareholder income. In this case if the shareholders’ focus is on maximization of profits alone then it would lead to the same outcome as that of the market mechanism, however if they deem social good as important as well then the system would also allow for maximization of their utility through these goals being achieved. They suggest a corporate referendum similar to a democratic referendum in order to arrive at these outcomes.

In his 1984 book7 Freeman suggested an alternate view about the firm’s executives wherein he argues that they are not only responsible for furthering the interest of the shareholders but in fact should be concerned about the welfare of all the ‘stakeholders’ of the firm. In this set of stakeholders, he includes shareholders as well any other party that is concerned with or could be affected by the business of the firm, this includes but is not limited to employees, customers, suppliers and government organization. He paints the firm existing in an ecosystem that requires the welfare of all stakeholders in order for the firm to benefit in the long haul. For example, Freeman argues that if the employees of the firm are not satisfied then the firm will eventually suffer losses. Many companies like Unilever are now transforming themselves in light of the stakeholder theory.

The CEO of Unilever, Polman in an interview8 has clearly discerned two ways in which a firm can maximize stakeholder welfare and at the same time ensure long term benefits: -

Thus, a new climate and ecosystem is emerging with evolving roles and responsibilities of the firm in place by the market and its participants for the firms to follow. The way ahead, or rather the optimal/profitable, way ahead seems to be the one where firms take and act on not just the monetary welfare of the shareholders but instead in accordance with the welfare of the stakeholders of the firm or the larger society.