Aristotle’s virtue ethics theory is important in addressing many ethical problems in business and organization management because virtue and moral character “provides the wisdom necessary for applying rules in particular instances” (Hinman, 2006). Aristotle suggests that every art and every investigation, as well as every pursuit and every action, aims at some good; therefore, the good has been defined as the object at which everything aims. Aristotle further states that there in not one single good. As there are many sciences and branches of knowledge, there are correspondingly numerous ends at which they aim. Mankind is perpetually in search of moral values and right conduct, however, leading a truthful and virtuous life is not easy. Aristotle describes virtue as a habit that can be learned and gained through practice.

This paper examines the importance of Aristotle’s theory of virtue ethics in business and organization management, in doing so, the paper summarizes the basic tenets of the virtue theory and presents some case studies. Finally, the paper compares Aristotle’s virtue ethics with alternative approaches to business ethics, such as utilitarianism and deontology, and argues that virtue ethics best serves the common good of society. Virtue ethics is necessary in all spheres within the entire spectrum of business -finance, governance, leadership, marketing, and production because the different vocations that comprise an organization or business enterprise are charged with defining the standards of excellence that characterize the professions. The institutions that support those professions are also charged with providing conditions that enable practitioners to pursue this telos and avoid conditions that undermine it.

To completely understand the implications of applying virtue ethics to business, it is necessary to provide a brief overview of the essential elements of Aristotle’s virtue ethics. Virtue ethics is concerned with pursuing a certain type of morally inclusive excellence. Aristotle called it eudaimonia, generally interpreted as 'happiness', or 'human flourishing'. Broadly speaking, the concept of eudaimonia correlates with the well-lived individual (personal) and social (or professional) life, - “living well and doing well” (Aristotle, p.16-28)- is the ultimate goal for which all other transitional goals are pursued. “Eudaimonia is the principal and final good desirable for its own sake and not for the sake of something else” (p.33-35).Therefore, a person who is living well and doing well must be virtuous and knowledgeable. 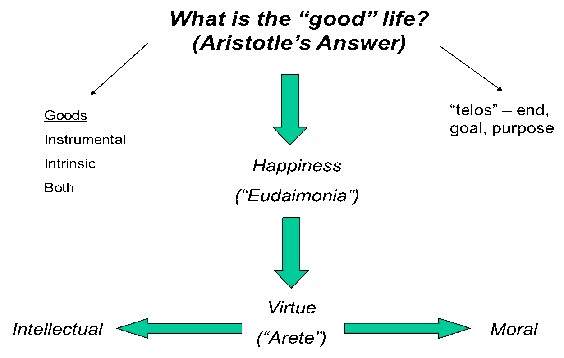 Aristotle describes virtue as a “state of character which makes a man good and makes him do his own work well” (Aristotle, 350 B.C.E. p. 246). He accentuates that virtue could be moral or intellectual and must have the quality of aiming at the intermediate” and identifies the ‘golden mean’ as the virtuous state of character while proposing that states of deficit and excess are fundamentally detrimental depending on the individual Aristotle’s list of virtues and their corresponding vices are summarized below Table 1: Aristotle’s Virtues (Book II, Nichomachean Ethics)

Aristotle acknowledged and placed above all others, the cardinal virtues of courage, justice, practical wisdom and temperance which are strongly entwined and play a vital role in achieving eudaimonia. He identifies justice as the greatest of the virtues because it is aimed at the eudaimonia of others rather than elf and emphasizes the system of lawful rights and equality between different members of the state. Practical wisdom (or phronesis) is the master virtue that guides all others. Aristotle states that eudaimonia is possibly only in the polis’ -the corporation, the neighbourhood, the city or the country (and the world) for us—and strive to excel, to bring out what is best in ourselves and our shared enterprise, therefore, virtuous persons must seek the good not only for themselves, but for others in society. In summary, what this overview of virtue-ethics theory makes clear is that an individual, whether corporate professional, business or otherwise, cannot be ethical in a vacuum but must be educated in the virtues by a nurturing community, and by the guidance of exemplars.

Virtue ethics is the basis of the normative ethical decision-making process for an individual and an organization or business. Virtue ethics provides a moral foundation for modern businesses and organizations and ought to be a prerequisite in business practices. Within the virtue context, business interests and activities should support rather than undermine human life. Utilizing Aristotle’s virtue ethics perspective, honesty is one of the virtues that applies across cultures and times. Business refers to a vocation or activities in which people engage in for profit or for the “common good”, in this case, the purpose of business, is only attained if everyone achieves their individual good in harmony with others. Businesses could be public or private commercially oriented, ranging in size from one-person proprietorships to corporate giants. Nevertheless, “businesses are organisations that respond to the market”, i.e. to the needs, desires and wants of customers (Jones 2005: 11). This means that a virtuous business will not only be self-interested, i.e. focus on the bottom line, but will also be other-regarding, i.e. take the well-being of its employees, environment, customers and community into moral consideration. In other words, the essence of ethical business should be to produce happiness for all through the production of valuable goods and services. The art of business is “creating structures within which human partnerships can flourish, partnerships for living well” (Morris 1997, p. 104).

As organizations take a further step into the future, people and organizations want to earn more and turn their investments into goldmines overnight, substituting virtue for profits, however, there are still organizations that operate and conduct businesses ethically and morally. For instance, the Coca-Cola company has within the organisational Code of Business Conduct a virtue ethics and governance obedience program with guidelines for conducting business ethically, the code is a prerequisite for every employee, the importance of this, is to ensure obedience to precise "ethics" of character such as honesty, fairness, judiciousness, and courage. In applying Aristotle’s notion of eudaimonia to businesses in today’s evolving and multifaceted world, we can allude to the telos of business existence as value-based to sustain the wellbeing of individuals, families and communities through jobs, provision of goods and services as well as to achieve social justice for all.

An executive is privy to confidential investment information after a board meeting and he discloses the information to a friend who a hedge fund manager. The hedge fund manager takes advantage of the opportunity and makes millions from the company shares overnight. Would a virtuous person have leaked the information? No, the executive showed a failure of character: Integrity: Integrity is honesty and truthfulness or accuracy of a person’s action. The executive is not honest to his company because he discloses confidential information for his personal benefits. Trust: He broke the trust of the other directors as well as the trust of all others whom he has conducted business with. Fairness: His actions are unfair for two reasons. First, other investors not privy to the information are disadvantaged, secondly, he uses information entrusted to him for personal benefit. Honesty: He was not honest with his company and the other board members to whom he tacitly assured not to share confidential information. Self-Control: He lacked self-control otherwise, he would not have leaked confidential information for personal gain. (Bhala et. al, 2016)

The deliberative and calculative purpose of practical wisdom in the virtue framework cannot be overemphasized. Practical wisdom decides on the suitability of wants and the means to gratify the wants by considering the type of wants, the situation, period, and available resources. For instance, a finance director must make a choice on whether to boost her company's operating financial statement by creating a pseudo leaseback arrangement while adhering to all accounting principles, meanwhile the company still maintains use of the properties. The purpose of the deal was not for the company to get rid of the unwanted assets, but instead to manipulate the records for a profit, perhaps also evade regulatory requirements and fulfil debt contract agreements. In terms of efficiency and effectiveness, the finance director possibly will be a 'good' accountant, and at the same time within an ethical context, not be a 'good' accountant. However, being virtuous, the option of exploitation to make profit against the constraints of an ethics code would not even be an ultimate objective. “Aristotle truly believes that a successful pursuit of the good necessitates a harmony in an individual’s personal and social relations (and by implication, personal and social goods). He explicitly holds that social relations embody the same natural propensity that constitutes, and in turn, conditions, personal relations. Aristotle believes that when a moral agent performs various roles in her life, she always exhibits virtue and character in all her roles. Conversely, she may also reflect a lack of such virtue and character” (Shukla, 2017).

Aristotles virtue ethics, greatly differs from Kantian and Utilitarian ethics. The dominant question modern ethical theorists are concerned about is “What must we do”. The deontologist and the consequentialist proposition rudimentary moral ideals that state how we ought to act in morally complex circumstances (Geirsson & Holmgren, 2000). However, virtue ethics advocates argue that such theories are lacking and suggest the importance of focusing on the question of what distinctive traits individuals ought to develop in themselves (Geirsson & Holmgren, 2000).  Both Kantian and utilitarian ethics are action-focused. Kantian ethics argues that a right moral action is one performed out of duty, while utilitarian ethics holds that an action is morally right only if it produces the greatest happiness or benefit for the greatest number of people (Rachels 2007: 97). This implies that “when we act out of feelings, inclinations, or self-interest, our actions although they may be otherwise identified with ones that spring from the sense of duty have no fine moral worth” (Shaw 2008:57).

According to Slote, virtue ethics treat “aretaic concepts, such as “good” or “excellence” laying down what is moral in relation to inner factors such as character and motive, rather than deontic notions, such as obligation, ought, right, and morally wrong which sees rightness as a matter of producing good results or conforming to moral rules or principles, but virtue ethics specify what is moral in relation to such inner factors as character and motive” (Slote, 2000 p. 325). Hursthouse stresses the contrast between the virtue ethics theory which has at its core, the heart or character of the individual and suggests that individuals can develop moral character over time through habitual action and practice unlike the other ethical theories that emphasize rules or duties, or those that focus on the consequences of actions. Conclusively, from an "Aristotelian" perspective, a corporate entity, -like an individual--is embedded in a community, and corporate values such as fairness and honesty are meaningless until transformed into action therefore, values--coupled with action--become virtues, and virtues make possible any good business corporate relationship.